The Book of Lies; Mary Horlock 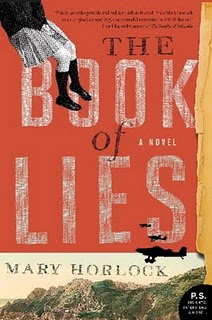 Title: The Book of Lies
Author: Mary Horlock
Publication Year: 2011
Publisher: Harper
Edition: eBook
Source: Net Galley
Date Completed: 7/19/2011
Setting: Island of Guernsey
Rating: 3.5/5
Recommend: yes
The Book of Lies tells two stories which took place on the island of Guernsey. The novel begins in 1985 with fifteen-year-old Catherine (Cat) Rozier writing a confession about how she killed her best friend, Nicolette (Nic). She also tells us that her own father is dead, and that she didn't kill him, although she thought about it. We also learn whatever happened to Cat's father is connected to Nic.
It seems Catherine isn't the only one who got away with murder on the island, which was occupied by the Germans during WWII.  At that time Cat's father Emile was a young boy when the German's invaded, and for many years of his adult life he was trying to sort out the truth from the lies as to what his own father and older brother Charlie's role was during the war.
As Cat writes her own story about how she was betrayed by her best friend Nic, another story which was documented by her father's brother Charlie, tells of how he was captured, starved and tortured by the Germans after someone he also trusted had betrayed him, when he was about the same age as Cat.  We also learn about the role the grandfather played during the war and what had happened to him.

As Cat writes her story about what happened in (1984-1985), I found her to be a bit naive, but also a lonely teenager who longed for acceptance. She thought she had found that with the cool, pretty girl Nic as her best friend. Together they did the things many teens do and sometimes to excess: makeup, boys, drinking and other  high school antics, and then her best friend betrayed her.

The story alternates between Cat's story and Charlie's story decades earlier. I was not fond of how the story unfolded. Just when I was getting into Cat's story, the story would then change to a story about the war.  It might have worked a bit better if alternating chapters were used to separate the two stories.  The characters were well developed, and I thought Cat and probably more so, Charlie were sympathetic.  I do think this was a good debut novel, and I would recommend it with just minor reservations.

Posted by (Diane) Bibliophile By the Sea at 9:27 PM