Travels With Charley in Search of America; John Steinbeck 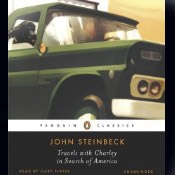 After recently reading East of Eden by Steinbeck, one of my favorite classics of all time, I have to say that although I liked Travels With Charley in Search of America, to me, it paled slightly in comparison to other books I've read by him.

Don't get me wrong, I enjoyed spending time on the road with the author -- age 58 at the time-- and his poodle, Charley, as the two spent several months, traveling the US in a pick up truck -- some 10,000 miles, traveling from NY to CA and many places in between, with his goal being to feel a sense of connection with his country.

" When I was very young and the urge to be someplace else was on me, I was assured by mature people that maturity would cure this itch. When years described me as mature, the remedy prescribed was middle age. In middle age I was assured that greater age would calm my fever and now that I am fifty-eight perhaps senility will do the job. Nothing has worked."

On their journey, the reader gets a good mental image of what people in various parts of America thought of life in the 1960s, and just how dissatisfied many people were with their life at that time.

“I saw in their eyes something I was to see over and over in every part of the nation – a burning desire to go, to move, to get under way, anyplace, away from Here.  They spoke quietly of how they wanted to go someday, to move about, free and unanchored, not toward something but away from something.  I saw this look and heard this yearning everywhere in every state I visited.  Nearly every American hungers to move”

At times I felt as if Steinbeck was speaking directly to me, especially when he described autumn in New England,  Maine lobster, and his observations about nature and animals. He made appreciate, even more, how lucky I've been to have lived my life in various parts of new England.  His writing was often very humorous, and by having listened to the reader with this one, I admit to a few laugh out loud moments as well.

Steinbeck's goal with this trip was to feel a sense of connection with his country, and I thought about that a lot after I finished this book.  Personally, I was left with the impression that some of the places he visited, and the people he met, ultimately left him with a sense on sadness and a bit of a disconnect as well.  Hatred, discrimination and an unwillingness to accept the changes that were taking place in America in the 1960s by many, left me with a very unsettled feeling at times as well.

Have you read this one? What did you think?