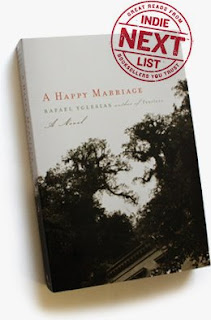 The story A Happy Marriage begins in the 1970's when Enrique Sabas meets Margaret Cohen, who becomes his future wife. The two come from different backgrounds, but despite that, there is an immediate attraction.
Told in alternating chapters, it is a poignant story. It covers their dating tears, their marriage and other import events in their lives, which includes touching and compassionate detail about Margaret's battle with cancer, her ultimate demise and her husband's devotion to her throughout.
It was not a perfect marriage, there were disappointments and financial challenges along the way, but it was portrayed as a "happy Marriage" which seemed to grow deeper when the reality set in for Enrique that her would indeed be losing his wife to this dreaded disease.
Throughout the novel there was this amazing use of foreshadowing which I found very effective. The characters were real, and developed in a way that will stay with me for a long time to come. I found it particularly touching when Enrique was making final arrangements for Margaret's death, and although there were many passages I had to stop and reread a second time, this one left me teary eyed, (as it reminded me of something my mother did when I cared for her as she was dying).......
"She wants to go in oblivious peace, he thought, looking down at the profile that appeared on the sheet's edge. That morning an alert Margaret had announced that she completed her last chore, choosing her burial clothes. He understood now that when she has asked to go to her grave wearing the earrings he bought her for her birthday, she meant that to be her goodbye to him, her last words of approval and gratitude. She had spoken and he did not answer."
A deep, passionate love story of a marriage through sickness and in health. Although this one is a work of fiction, the story was inspired by the author's relationship with his wife Margaret who passed away in 2004. The author was a high school drop out who published his first novel in 1972 at the age of 17. He is the author of nine books. RECOMMENDED
RATING - 4.5/5 ; COMPLETED - 7/9/09; REVIEW BOOK
Posted by (Diane) Bibliophile By the Sea at 9:33 AM