“So here today I present to you an Unread Books Challenge. Give me the list or take a picture of all the books you have stacked on your bedside table, hidden under the bed or standing in your shelf – the books you have not read, but keep meaning to. The books that begin to weigh on your mind. The books that make you cover your ears in conversation and say, ‘No! Don’t give me another book to read! I can’t finish the ones I have!’"

I'm pathetic really, but how could I take a picture of over 200 books, so I narrowed it down to (7) that I really want to read, but have been avoiding for some unknown reason?? 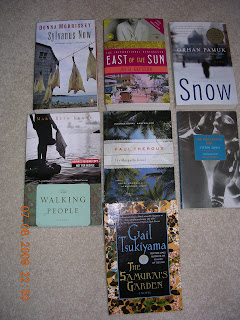 Don’t forget to leave a link to your actual response (so people don’t have to go searching for it) in the comments—or if you prefer, leave your answers in the comments themselves!

Email ThisBlogThis!Share to TwitterShare to FacebookShare to Pinterest
Labels: Booking Through Thursday