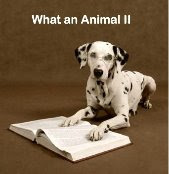 I had so much fun with this challenge last year that I couldn't resist signing up again this year. Thanks Kristi for hosting this challenge in 2009/2010.

1. Read at least 6 books that have any of the following requirements:

2. The animal can be any type of animal (real or fictitious)--dog, cat, monkey, wolf, snake, insect, hedgehog, aardvark...dragon, mermaid, centaur, vampire, werewolf...you get the idea...

4. Books can be fiction or nonfiction.

5. You may make a list of books at the beginning of the challenge or you can just list them as you find them.

6. Book titles may be swapped out at anytime (assuming you made a list to begin with).

7. Crossovers with other challenges are permitted and encouraged.

8. You don't have to have a blog or write a review, but you can if you want to.