Waiting on Wednesday: The Locust and the Bird 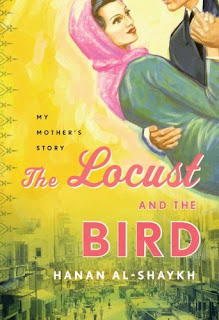 "WAITING ON WEDNESDAY" is hosted by Jill from Breaking the Spine.
Title: The Locust and the Bird: My Mother's Story
Author: Hanan Al-Shaykh
Pub. Date: August 25, 2009
Book Description:
“One of the most daring female writers of the Middle East” (San Francisco Chronicle) gives us an extraordinary work of nonfiction: an account of her mother’s remarkable life, at the core of which is a tale of undying love. In a masterly act of literary transformation, Hanan al-Shaykh re-creates the dramatic life of her mother, Kamila, in Kamila’s own voice. We enter 1930s Beirut through the eyes of the unschooled but irrepressibly spirited nine-year-old child who arrives there from a small village in southern Lebanon. We see her drawn to the excitements of the city, to the thrill of the cinema, and, most powerfully, to Mohammed, the young man who will be the love of her life.Despite a forced marriage at the age of thirteen to a much older man, despite the two daughters she bears him (one of them the author), despite the scandal and embarrassment she brings to her family, Kamila continues to see Mohammed. Finally, after nearly a decade, her husband gives her a divorce, but she must leave her children behind.
The Locust and the Bird is both a tribute to a strong-willed and independent woman and a heartfelt critique of a mother whose decision were unorthodox and often controversial. As the narrative unfolds through the years (Kamila died in 2001) we follow this passionate, strong, demanding, and captivating woman as she survives the tragedies and celebrates the triumphs of a life lived to the very fullest.
What's your pick this week?
Posted by (Diane) Bibliophile By the Sea at 12:16 AM