Waiting on Wednesday: Day After Night 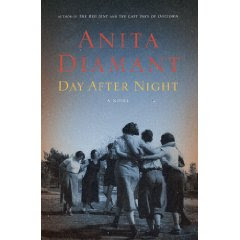 "Waiting on" Wednesday is hosted by Jill of Breaking the Spine, and is a way for bloggers to share the upcoming books that they're longing for.

Set in 1945, in the summer immediately following the end of World War II in Europe, DAY AFTER NIGHT tells the stories of four young Jewish women -- survivors of four different kinds of hell. They make their way to the land of Israel where they confront an uncertain future haunted by the past.

The protagonists -- Leonie, Tedi, Shayndel and Zorah -- are interned when they arrive, locked up behind barbed wire fences in a place called Atlit, a prison camp run by the British, who ruled Palestine at the time. In Atlit, the women meet and befriend one another as they grapple with a new life in a new land.