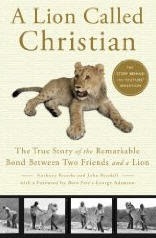 Like many people, I fell in love with the 2008 YOUTUBE sensation video about Christian the Lion; I watched it over and over again. In 2009, some 38 years after the book wasfirst published A Lion Called Christian: The True Story of the Remarkable Bond between Two Friends and a Lion

, by Anthony Bourke and John Rendell was revised and updated with more than 50 photographs. The book was a huge success and it reached the top 10 list at Amazon.com in early 2009.

An uplifting story about man and beast by the authors who bought and the cute cuddly lion cub from Harrods in London. Bourke, Rendall and Christian lived in a flat above a furniture store in London . Christian received excellent care, regular exercise and love until the cub simply became to large to continue to live in captivity. Determined not to send the lion to a zoo for the rest of his life, arrangements were made to transport him to Kenya to integrate him into the wild with his own kind. One year later when Bourke and Rendall went out to visit, Christian seemed to recognize his former masters and greeted the two with a "lion's hug", captured on video.

This book is truly a remarkable story about the bond between man and animal. The video was wonderful, and brought tears to my eyes whenever I watched it, however, the story and the photographs have so much more to tell. This gem of a book is just over 200 pages, and is sure to please animal lovers everywhere. Highly Recommended